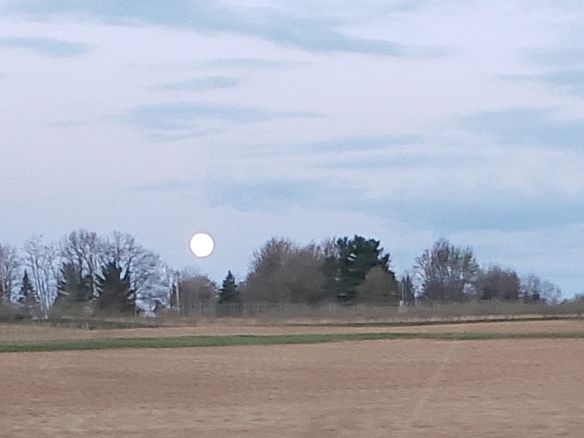 Last Thursday morning on the way to the church, I stopped my Jeep beside a farm on Linden Road and attempted to take a picture of the moon. The pale sphere was massive and full, and it hung just above the horizon. Its appearance was so grand, and its presence so near, I felt as though I could reach out and touch it.

To be sure, we all know the foolishness of trying to capture celestial moments like this. And my foolishness was proven by the moon’s barely representable image on my camera. Before my naked eye, it looked grand, but in reality, it wasn’t so. What I was seeing was an illusion.

I’ve read about this before. I know there’s more than one theory as to why the moon looks the way it does when it’s so close to the horizon. Arthur Schopenhauer, a German philosopher, wrote that it had nothing to do with science, but was really nothing more than a trick of the mind.

Ptolemy claimed it had something to do with a combination of things, namely optics and light refraction. Strange, though. Even though what I was doing in that moment was a waste of time—because it has never worked for me before—I still attempted to capture the image anyway. And of course, the result was as it has been in the past: a distant and blurry dot seated in an unreachable expanse.

Funny. We keep on doing the same old things.

In the end, I suppose it wasn’t a complete waste of time. I drove away with plenty to consider.

Mindful of God’s Word, I realized how even the natural laws can serve as powerful extensions for much deeper truths. Even a solitary moment beside a farmer’s field on a brisk and misty morning can be a useful metaphor capable of teaching something really very important, maybe even becoming a moment for multi-tiered self-diagnosis.

At first, I was reminded of how humanity tries to encapsulate things that just aren’t there—to grasp the ungraspable, to control the uncontrollable, to take hold of something’s fixed substance but really only being found swatting at its shadow. I suppose the topic of human sexuality was the first example that came to mind that morning, but that probably because I was listening to a podcast hosted by a transgender man discussing current attempts across the country to expand the meaning of the word “sex” to include “sexual orientation and gender identity” in the civil rights legislation in various states.

He argued with heartfelt sincerity, and he presented his case with believable concern.

In that moment, there was the grandest of illusionary moons right in front of me. In the podcast, there was a biological man putting himself before this spinning globe as a woman, doing all he could to play the part. But then I paused the podcast, stopped my car, and I took the picture. Natural Law remained fixed. The moon was as the moon really is. When I pressed the play button, no matter how hard he tried to sound feminine, his deeper, gentlemanly voice always betrayed the biological man. I’m sure if I saw a picture of him, the same betrayal would occur.

This was my initial contemplation, and for the record, it didn’t really last all that long. I stopped the podcast, and drove the rest of the way to the church listening to a mix of songs Evelyn made for me. And as I did, more applications swept through.

For one, I pondered the temptation of Man to believe his deeds play a part in salvation.

Our efforts seem so grand. Our good deeds appear so bright, beaming with a superior light in comparison to the other stars in the heavens. But then God takes out the camera of His holy Word, and through the lens of His Law, we see the distance between us and what we would like to believe our abilities to be. The parable Christ told of the Pharisee and the Tax Collector in Luke 18:9-14 reveals this foolishness clearly. The momentary self-analysis Paul performs in Romans 7:14-24 does, too. And if we somehow miss these easily-digestible texts, there’s always the all-encompassing reminder of Mankind’s birth in Sin in places like Psalm 51:5.

I could go on, but I think you get the point.

In summary, God doesn’t hold back on making sure we see our attempts to win His favor by our deeds for what they are: an infinitesimal speck on the horizon of worthiness. In fact, even using the word “worthiness” is being overly generous. In Sin, we’re completely dead (Ephesians 2:5). Apart from the Holy Spirit’s work in and through us for faith in Christ, we’re a dead sky—deep, dark, and completely barren.

Then there’s the Gospel—and the moon’s metaphor works here, too. In this instance, however, the illusion is reversed.

The sinful flesh struggles within me to communicate one thing, but the eyes of faith see something completely different. My sinful flesh would have me believe that because I am so dreadful, God is distant, that He could never love me, that He’ll be forever out of reach, that I’ll be forever squinting to see His mercy. But the Holy Spirit works through the Gospel, and by faith, I put down the mechanisms of this world and behold that which they cannot reveal. God is not far, but near. He is with me. He has seen me in my desperate state, and He’s reached to me in love through the person and work of His Son, Jesus Christ. By Him, I am not lost, but rescued. By Him, I am not condemned, rather I’m justified and counted as His holy one (John 3:16-18).

Of all the allegories born from that beautiful display by the moon last Thursday, this was the best one. If I’d had a lawn chair in the car, I’d have set it near the edge of the field and watched until the moon finally dissipated into a more sunlit atmosphere. I’d probably have broken into chanting Psalms 8, 19, and 139; all texts proclaiming the majestic glory of God’s wonderful creation.

With that image in your mind, I offer one last important note.

Notice that God’s Word was the translator in all of this. As I observed the natural world, God’s Word was governing my discoveries. And so I say, stay in the Word. Live in it. Hold fast to it. It will always provide the better, truer, view of your surroundings. With a faith fed by the Holy Spirit through the Word of God, each and every moment will always be so much more than a natural occurrence. Each moment will hold the potential for teaching. It will be an opportunity for seeing Christ at work when and where the world cannot, just as the Lord said in John 14:19.